I love a good locked-room mystery and dove into the technothriller, Pryor & Cummings: The GAIA Incident by Rod Pennington, not knowing what to expect. Pennington delivered a suspenseful mystery with interesting characters and plenty of twists. Fans of crime thrillers and technothrillers will want to grab this one. 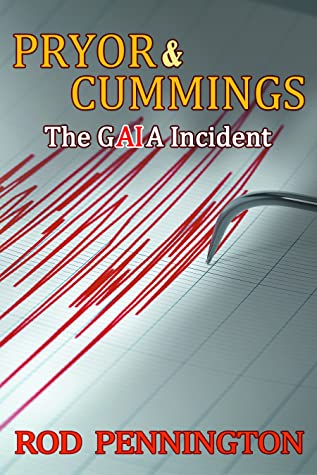 Late at night, a hacker sneaks into the underground lab of a celebrity scientist where he makes a discovery which gets him murdered. The police soon learn surveillance video shows no one had left the facility since the homicide and a thorough search for the killer comes up empty.

To solve this locked room techno-thriller-mystery, an old-school detective and his retired K-9 reluctantly partner with a young high-tech rookie. Questions about motives and possible conflicts of interest fly when the veteran learns about the relationships his daughter has with his new partner and she had had with the deceased

Detective Albert Pryor is taken off probation and made a lead when the body of a GAIA Institute graduate student is found in a locked computer lab. He is partnered with rookie Max Cummings. Cummings is a techie and despite not being happy about it, Pryor soon has to admit the kid knows his stuff.

I like Pryor from his dog to his cherry red classic 1958 F150. The GAIA Institute is run by his ex-wife’s new husband and the reason for Pryor’s recent suspension. Not only was the mystery interesting and but so were the characters from Pryor’s daughter to his ex-father-in-law.

I loved the conversations between Pryor and his college daughter Brooke. The girl is a techie geek and completely fearless. There is a little romance that involves Max and Brooke. I loved the thread and how it affected interactions between Pryor and Cummings. The author did a great job of pulling me in and keeping me invested. I laughed, cheered and rooted for each of these characters.

The locked door mystery was well done and kept me guessing as the suspense built. Rod Pennington was the perfect villain, but there is more to this story. Pryor was determined to pin the murder on him. The author delivered plenty of twists, while allowing the reader to ponder the future of artificial intelligence.

While I am not a fan of the cover, I was impressed by the story from the flow to the characters and will definitely read this author’s work again. Fans of murder-mysteries and small-town dynamics will want to grab this one. I am hoping we see more of Pryor & Cummings.

Rod Pennington writes a mixed bag of suspense stories filled with quirky characters, rapid-fire dialogue and whiplash inducing plot shifts. With his off-beat sense of humor and original storylines that do not fit comfortably into any established genre, he has developed a hard-core group of fans. In addition to fiction, Pennington has either sold or has optioned seven screenplays and also writes regularly in national publications such as the Wall Street Journal.

What is Throwback Thursday? I've noticed several of these memes...