By Gilion at Rose City Reader

Greeting from Omaha, Nebraska, my Book Beginnings friends! I’m on the road this week, helping my mom and sister move from Oregon back to our hometown of Omaha. We’ve lived in Oregon for over 40 years, but the Midwest called them home. I will miss having them close by. Fortunately, it’s easy to fly to Omaha, since it’s right in the middle!

On to Book Beginnings! Please share the opening sentence (or so) of the book you are reading this week, or just a book that caught your fancy and you want to highlight.

At half past seven on the twenty-fourth of January 1955, Katherine Clark shivered as she left the dark, run-down lobby of the old, central district courthouse and stepped outside onto its front steps.

– from Chapter One, “Belgrade” in The Double Life of Katharine Clark: The Untold Story of the Fearless Journalist Who Risked Her Life for Truth and Justice by Katherine Gregorio.

The Double Life of Katharine Clark is a thrilling new nonfiction book about an American journalist who smuggled an anti-Communist manuscript out of Yugoslavia during the Cold War. Read the publisher’s description below because it sounds amazing! I just got my copy and can not wait to read it. 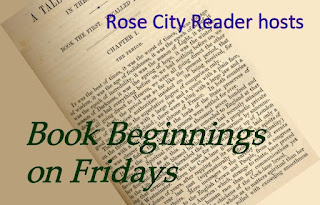 Please add the link to your Book Beginning post in the Linky box below. If you share on social media, please use the hashtag #bookbeginnings.

Mister Linky’s Magical Widgets – Thumb-Linky widget will appear right here!
This preview will disappear when the widget is displayed on your site.
If this widget does not appear, click here to display it.

Another fun Friday event is The Friday 56. Share a two-sentence teaser from page 56 of your book, or 56% of the way through your e-book or audiobook, on this weekly event hosted by Freda at Freda’s Voice.

From The Double Life of Katharine Clark:

She took a deep breath and turned to Milovan, asking him if he remembered her from the courthouse.

Milovan stared back at her blankly, furrowed lines wrinkling his forehead.

In 1955, Katharine Clark, the first American woman wire reporter behind the Iron Curtain, saw something none of her male colleagues did. What followed became one of the most unusual adventure stories of the Cold War. While on assignment in Belgrade, Yugoslavia, Clark befriended a man who, by many definitions, was her enemy. But she saw something in Milovan Djilas, a high-ranking Communist leader who dared to question the ideology he helped establish, that made her want to work with him. It became the assignment of her life.

Against the backdrop of protests in Poland and a revolution in Hungary, she risked her life to ensure Djilas’ work made it past the watchful eye of the Yugoslav secret police to the West. She single-handedly was responsible for smuggling his scathing anti-Communism manifesto, The New Classout of Yugoslavia and into the hands of American publishers. The New Class would go on to sell three million copies worldwide, become a New York Times bestseller, be translated into over 60 languages, and be used by the CIA in its covert book program.

Meticulously researched and written by Clark’s great-niece, Katharine GregorioThe Double Life of Katharine Clark illuminates a largely untold chapter of the twentieth century. It shows how a strong-willed, fiercely independent woman with an ardent commitment to truth, justice and freedom put her life on the line to share ideas with the world, ultimately transforming both herself – and history – in the process.

I received a free copy of this book in...
mystery

An Independent Woman in Yugoslavia: A Memoir by Iris Novak Review

I received a free copy of this book in...
60s memoir